​Please take a look at the English section fo our FORUM too! (registration required)

Personnelnetwork for LHBTIQ* and sympathising employees working as Special Investigations Officer (SIO) in all domains from across The Netherlands.

Having to hide one’s true identity costs a lot of energy, is a source of stress and reflects a negative influence on the performance of the employee, resulting in an increase of sick leave. Empowerment, good coöperation and cohesion in a team, in many cases also demand openness regarding one’s private life. To hide this not only costs a lot of energy, but when it is the case that employees cannot or dare not to reveal their true identity, there is a strong chance they will fall into social isolation.

Employers have, mostly based on work safety legislation, the relevant responsibility to create a socially safe working environment, by, among others, reducing psychosocial stress.

To come out of the closet a socially safe environment is a definate must. The Special Investigations Officer (SIO), as representative and reflection of both the Dutch government and Dutch society, plays a key examplary role in this.

Diversity is a fact we deal with on a daily basis. Inclusion and pluriformity are the key factors leading to a more powerful and social environment where SIO’s can develop their own talents, being themselves freely thanks to an open culture and the inclusive vision of the government.

*  LGBTIQ: Umbrella term for lesbian women, gay men, bisexual, transgender, intersexual and queer people. LGB regards sexual orentation. T and I regard mainly gender identity. Queer is the umbrella defination for all other, this can regard sexual orientation, gender or (n)either.

Special Investigations Officers (SIO’s) have a key role in Dutch society. They investigate certain criminal acts and are an addition to the police in enforcing public order and safety. SIO’s have offical investigative powers that are coherent to their task. These investigative powers are always limited to one single field. For example: a forest warden, environmental crime inspector, social benefit detectives or parking warden. ​

What investigative powers are assigned to a SIO?

Special Investigations Officers aid in supervising the local peace and safety. They check whether people abide the rules and don’t commit criminal acts, like incorrect parking or violating environmental legislation. They may apprehend suspects and impose punitive penalties. The powers assigned to a SIO, is mentioned in a so-called certificate of investigative powers. This varies per individual SIO.

Often a SIO is specialized in a (part of) a law or regulation. With this they have specific knowledge and enables them to act with more focus then for example a police-officer. A SIO is only allowed to enforce that field of duty, for which they are trained. Different SIO-positions are: forest warden, fire chief, bridgemaster, public traffic inspector, education enforcement officer, waterway inspectors, animal protection law inspectors, border patrol, municipal enforcement officer, marketplace inspector, cosntruction inspectors, labour inspetorate and many more. ​

Since april 1, 2010 SIO’s have nationwide investigative powers. In collaboration with the so-called local “triangle” (the public prosecutor, mayor and chief of police) they can apply their powers outside the area encompassed by their employer. The parties do have to enforce the agreement with a written statement. An example of such a statement can be found in the Circulairy SIO (Dutch).

How many SIO’s are there in the Netherlands?

In The Netherlands about 23.500 SIO’s are employed by around 1100 different entities. This encludes municipalities, governemental inspection services and organisations like State Forest Administration, Dutch Railways and Natuurmonumenten.

Wat is a SIO’s line of work?

There are six SIO-workfields, also called domains. Each domain has its own specific training demands. A SIO works in one of the following domains:

How do I recognize a SIO?

Do the SIO’s engage in contact with the public? Then they will have a badge. For example the parking and forest wardens. The badge shows that the SIO has special investigative powers, like sanctioning penalties, apprehend suspects and identity checking.

Diversity-network by GLBTIQ+ & sympathising in the field of the SIO (Special Investigation Officer) or #BOA in #NL. #handhaving ⚫💙⚫ ⚫🏳️‍🌈⚫ founded Aug. 2016 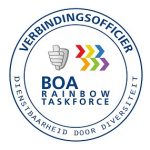